This gear came from West Baton Rouge Parish's last remaining sugar mill, Cinclare, located near Brusly. The property was once called Marengo Plantation. James H. Laws of Cincinnati, Ohio purchased Marengo for $26,000 in 1878 and renamed the plantation Cinclare after 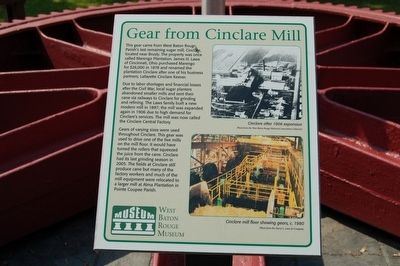 one of his business partners, Lafayette Cinclare Keever.
Due to labor shortages and financial losses after the Civil War, local sugar planters abandoned smaller mills and sent their cane via railways to Cinclare for grinding and refining. The Laws family built a new modern mill in 1897; the mill was expanded again in 1906 due to high demand for Cinclare's services. The mill was now called the Cinclare Central Factory.

Gears of varying sizes were used throughout Cinclare. This gear was used to drive one of five mills on the mill floor. It would have turned the rollers that squeezed the juice from the cane. Cinclare had its last grinding season in 2005. The fields at Cinclare still produce cane but many of the factory workers and much of the mill equipment were relocated to a larger mill at Alma Plantation in Pointe Coupee Parish.